French Loterie Posters by Edgard Derouet and His Workshop 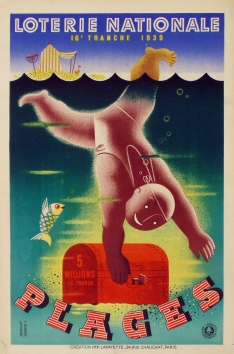 Advertising posters are meant to catch the attention of the passerby. While bustling about on daily business, a pedestrian may absorb the message on a poster, but if distracted, may miss the message altogether. This is where images can trump words, and a familiar image can work it’s magic at a glance. Graphic artists have always strived to find a vehicle which effectively commands the attention of the ‘(wo)man on the street’. One French artist who was very successful at this is Edgard Derouet who designed a clever campaign to promote the French Loterie which, in short order, became instantly recognizable to all.

The French Loterie has a complicated history. King Francis of France debuted the Loterie Royale in 1539, however it was not popular until the 18th century. The money raised by the lottery was used for various government projects, to rebuild churches, and government funds. Public opinions shifted, and when the populace complained about the lottery as exploitive, it was banned. The lottery came and went, enjoying periods of popularity followed by closures. One such closure came in 1836. The lottery did not exist again until it was revived by the socialist government, in need of funds, in 1933.

Edgard Derouet was chosen by the state to create and execute a campaign to promote the Loterie Nationale because of his formidable reputation as a graphic artist. This was not a small task because there had been no lottery for almost a century, and the public needed to be persuaded to participate. 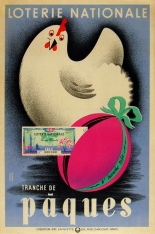 As a young man, Derouet had studied with famed posterist Paul Colin, and been a friend to Monaco poster artist Geo Hamm. He founded a magazine devoted to graphic arts, which featured the work of posterists AM Cassandre, Roger De Valerio and Jaques Nathan, and so he was on the cutting edge of design – in touch with trends and versed in the (short) history of the advertising poster. Derouet won an award for best poster of the year in 1936, and his work was exhibited at the International Exposition of 1937.

What image could convey the excitement of winning the lottery? This is the question that Derouet must have entertained when confronted with this demanding task. How about a man jumping for joy? And this is what Derouet designed. The client liked the figure because of its well tied tie, it’s neatness and its nationalistic look. The simplicity of the figure allowed the artist to elaborate on the settings in which he placed him.

The idea was clever, because the figure became familiar almost immediately. Like the Michelin man, the public smiled fondly on the little jumping man. Derouet had created a popular success. In 1939 the government planned an elaborate PR campaign for the Loterie, with 24 special drawings to be picked in different cities, and they tasked Derouet with communicating this placement with each poster. A couple of examples include the poster ‘weekend’ which depicts the jumping man as a traveler at a train station. This drawing was held at the train station Gare St. Lazare. “Parfums” was held in the South of France in the town of Grasse, which has long been associated with the perfumes they make. 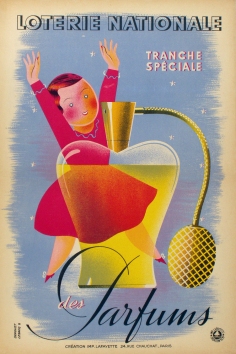 WWII put an end to lottery drawings in France. After the war, Derouet became the commercial director of the print house Bedos and Cie, where he worked for 30 years. Derouet retired in 1980.

Loterie posters are light hearted and fun. Here at Vintage European Posters, we have sold them for almost two decades and seen clients hang them in groups with great effect. This past summer, Vintage European Posters Collector Elizabeth Norris found two separate stacks of lottery posters from after 1950. Visit our collection of Loterie posters, including many by Derouet at www.vepca.com 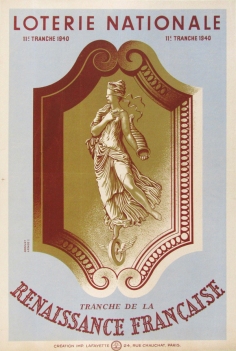 This post was written by Elizabeth Norris, owner of Vintage European Posters and edited by Kate Klingbeil, Print Specialist.

Vintage European Posters is a Berkeley based dealer of Original French and American Advertising Posters. Established in 1997, VEP now exhibits at 12 shows per year in California including Dwell on Design, Palm Springs Modernism, and the Hillsborough Antiques Show.

Our Showroom is located at 2201 Fourth Street in Berkeley, at the corner of Allston Way.

We are open most Tuesdays, and many other days. Our website is always up to date.
Please call ahead to confirm our hours.

You are currently reading French Loterie Posters by Edgard Derouet and His Workshop at Vintage European Posters.