After World War Two commercial air travel was, for the first time accessible to the public. Wartime technological advancements including radar and improvements in engineering led to faster, safer, and larger planes. An adventurous traveler could now leave their continent and in less than a day find themselves on the other side of the globe. Travel posters, always a tool of mass communication, showed exotic destinations as a means of announcing, “The world is now open to all.” Air France, one of the preeminent airlines both before and after WWII, employed the poster expertly. Their routes traced a history of commerce and many were carved out through colonialism. It is interesting to look at Air France’s choices of which destinations to promote to tourists in their advertising posters and also to examine the images used to evoke adventure, exoticism and ownership.

Although the war afforded advancements in technology and global economics, other institutions, like colonialism, persisted. Many European countries held stake in colonies thousands of miles apart. The British Empire’s holdings in India, the Middle East, and East Africa are often at the forefront of people’s minds, however, France and even smaller nations like Belgium and Portugal were key colonial players. France held power in North and West Africa as well as Vietnam, Laos, Cambodia, and the Caribbean.

Of the Allied powers, the French suffered particular hardship during WWII. As a Nazi occupied nation and one situated on the front lines, France’s infrastructure and economy were decimated by the end of war. Despite this, companies like Air France thrived in the new postwar environment. Flights around France, Europe, and the French colonies in Africa, Asia, and the Caribbean became increasingly popular. France’s colonial presences in West Africa and the Far East or L’Extrême Orient, especially Vietnam, made travel to these locations seem exotic yet possible. Posters, like the ones below, were created to market these destinations. The posters themselves, very similar in subject matter, speak to the ethos of the time. 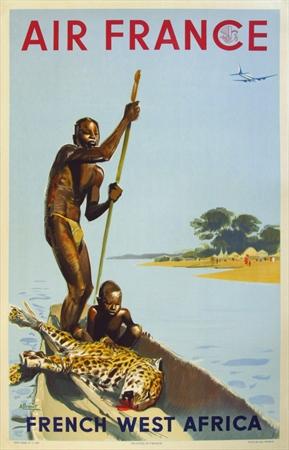 The West Africa poster was created in 1949 by Albert Brenet and shows two young men in a West African pirogue with their prey. This striking image makes references to the exotic bounty of the colony and would have grabbed the attention of any passer by. 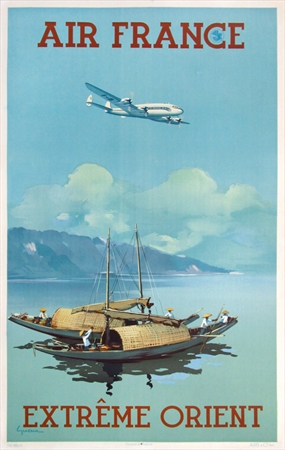 Extrême Orient by Vincent Guerra, was printed in in 1950 and features a beautiful bay and mountain scene with fishermen in their woven topped junks. The prominence of the plane shows France’s ownership of this scene as if to say “It’s ours- come explore it.” Both of these images seem to symbolize a rural, bucolic lifestyle that wasn’t quite the reality (pg. 130 Air France, https://www.scribd.com/document/54130846/The-Junk-Blue-Book). The Vietnam of the 1950s was fully embroiled in a war for its independence, first from the Japanese, then the French, culminating in the Vietnam War. 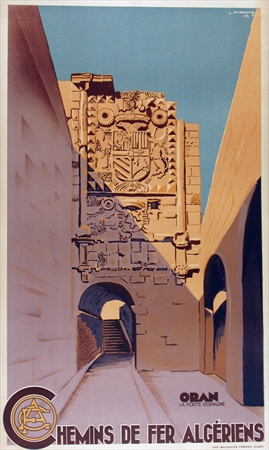 West Africa suffered similar hardships at the hand of its colonial rulers. While embroiled in bureaucratic struggles for recognition by the French Government, the native peoples of these West African nations, (Sénégal, Mali, Côte D’Ivoire, Burkina Faso, Mauritania, French Guinea, Benin, and Niger) were treated as subjects not citizens. Independence came in March of 1962 after the bloody Algerian War.

Today the colonial references on these posters are so obvious as to be almost embarrassing to the Western viewer. But they are an indelible record of the prevailing attitudes of the time period, as are all advertising posters. It’s important that they be preserved so that their messages are not forgotten.

Visit our collection on the web at vepca.com